Build You Own AI Assistant

Learn how to build your own Jarvis-like AI assistant, in Python

Welcome to the Build Your Own AI in Python series! In this project we’ll create our own artificially intelligent assistant, simliar to Siri, Alexa, Google home, or even Jarvis from the Marvel Ironman movies.

It makes sense to start at the beginning as each part builds on the previous lesson and each also contains vital skills and knowledge used in future lessons too.

I created a popular video series on YouTube, which goes over each of the steps below. The first video, Creating the Assistant is featured below.

In this session we will learn: Overview of this series

We’ll build our AI assistant one small part at a time, however at each step it will be able to do something useful. We’ll use Python; a programming language thats easy enough for beginners to understand, and powerful enough to create professional software.

How we will create an AI Assistant: How do AI Assistants Work?

So how do AI Assistants actually work? Lets take a look at the logical flow… An AI assistant is just a program, that follows a logical flow: A overview sketch of out AI Assistant

I love to sketch out ideas on paper before programming. This helps me separate out ideas into separate chunks; I can then work on each chunk one bit at a time.

The Initial idea is: 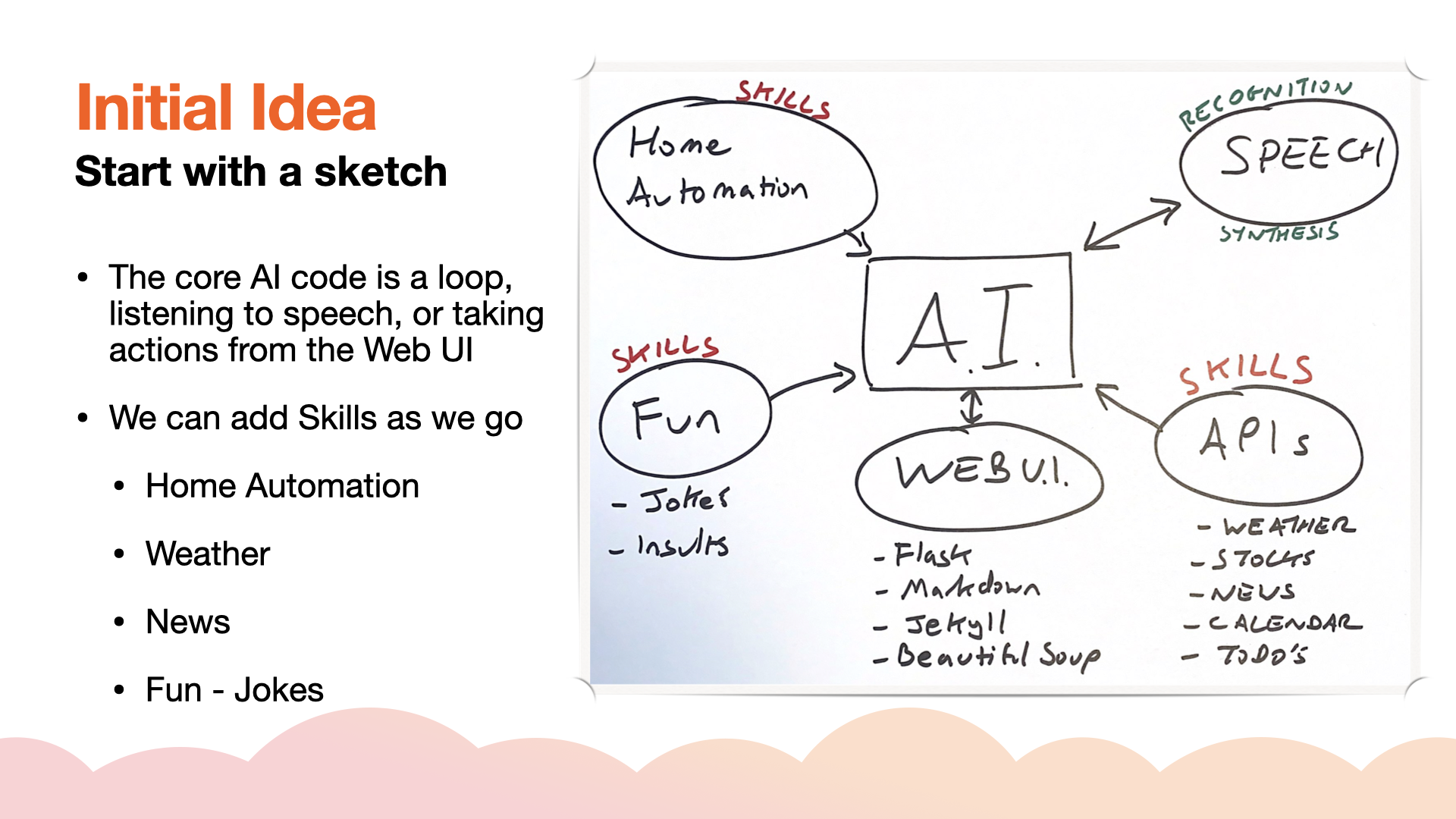 Our AI Assistant is made up of a number of parts, and we call the sum of parts, the architecture. 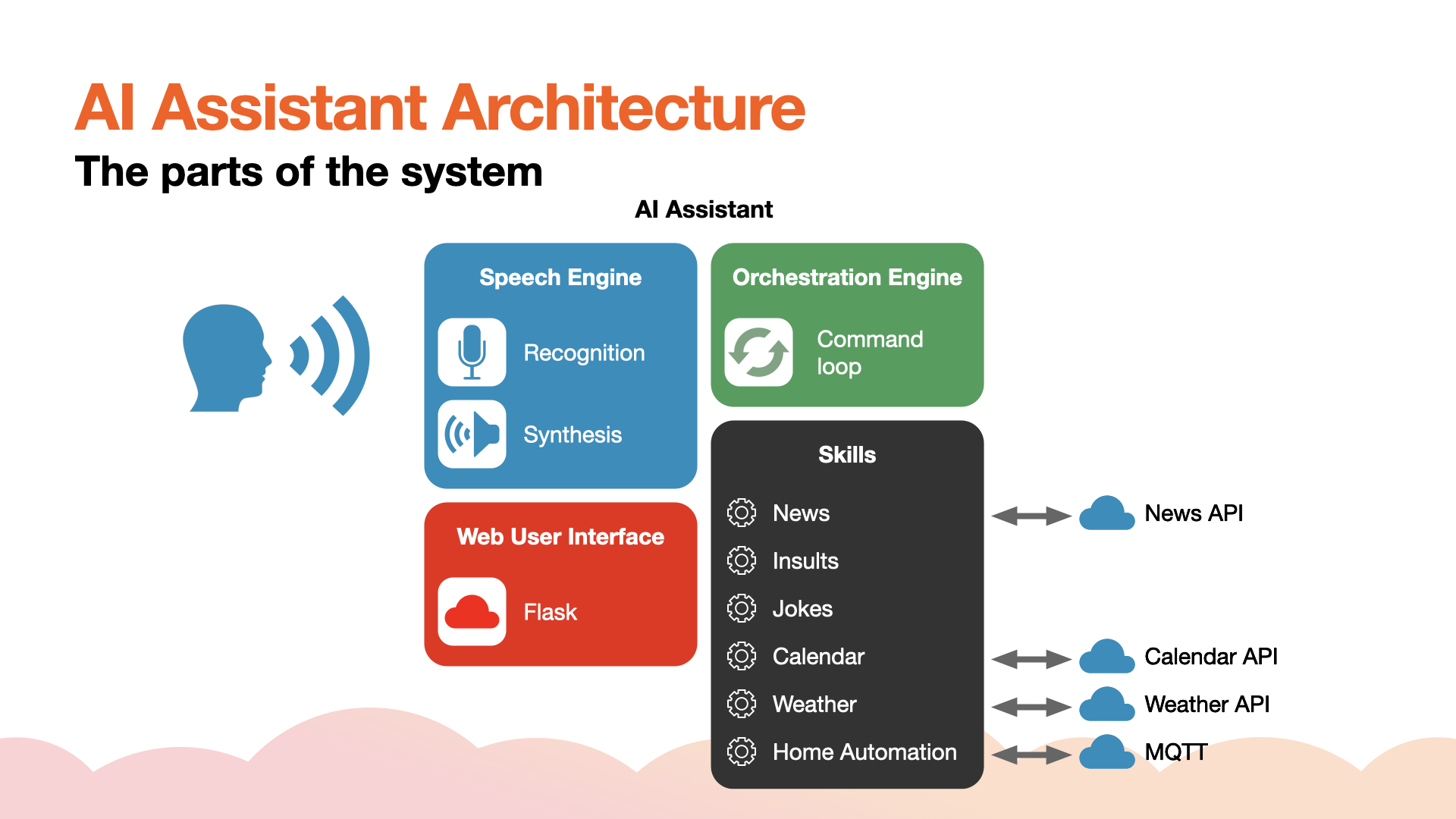 We will therefore need to create each of the four pillars, and as far as possible ensure they have low coupling and high cohesion.

Low coupling means each module/pillar should be self contained, other modules shouldn’t rely on specifics of how they work internally.

High Cohesion means that the code inside each module/pillar should work as effectively as possible, with each part doing only what it is supposed to do, and no more.

The four pillars are: For this project we’ll need a couple of things, some hardware to run our AI Assistant on, and some software tools to build it. 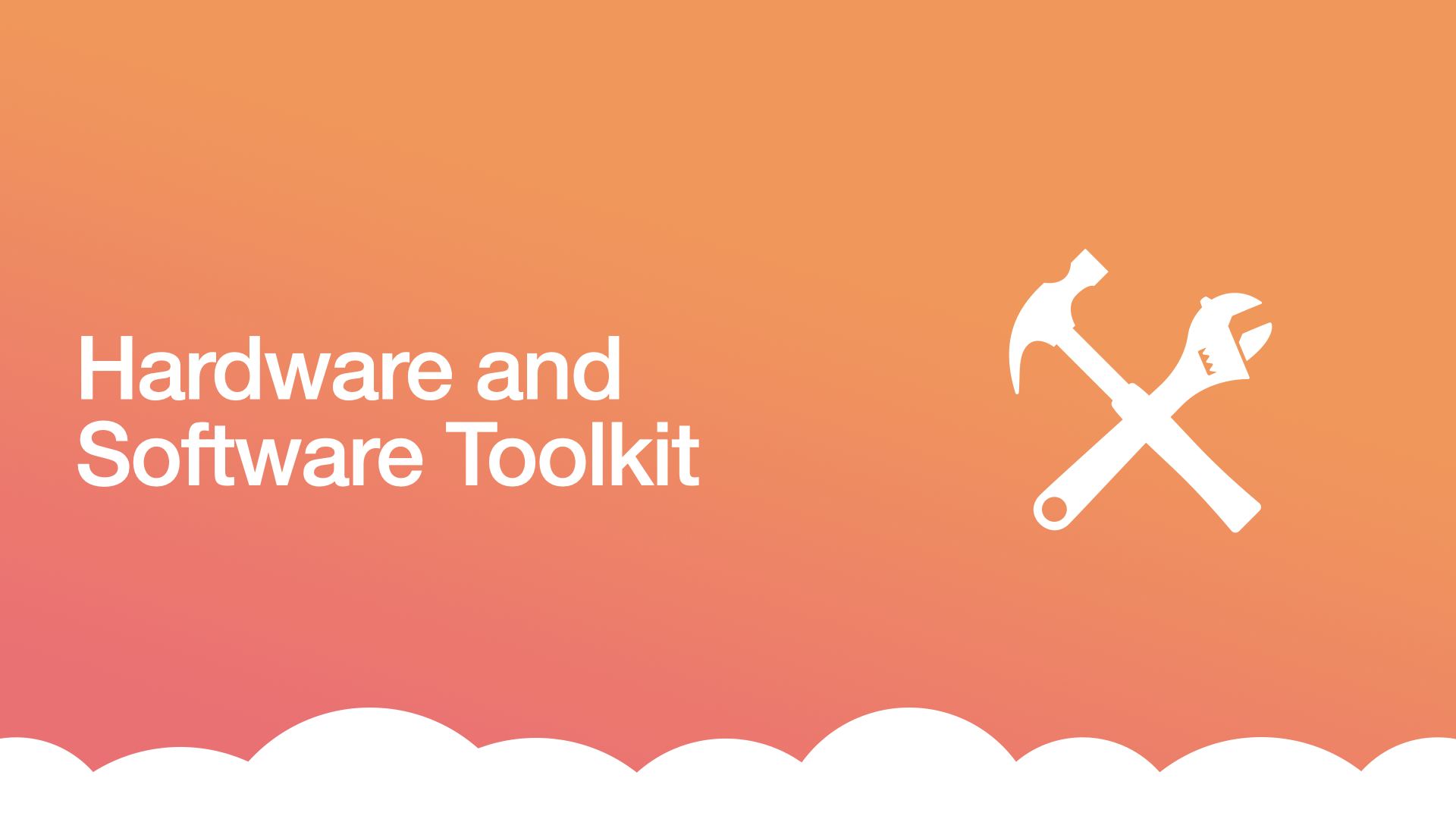 For hardware, you can run the Assistant on your own computer, Mac, Windows PC or Linux PC, For software, we will be using the following software applications: We want to add new skills over time as we develop them; lets create a skills framework: For the Raspberry Pi, and other Linux systems you will need to ensure that both portaudio and espeak are installed:

Virtual Environments enable us to keep specific versions of Python libraries separate between projects. If that doesn’t mean a lot right now, don’t worry it will make sense later.

Type the commands below into your terminal session to create the venv virtual environment, and then activate the environment using the source command.

Once we’ve activated our virtual environment, we can install the libraries our project depends on.

The source code repository for this project is hosted at GitHub. Click this link: https://github.com/kevinmcaleer/pythonai to download the latest version of the code.

Please note that as the series progresses, code is changes, so you will be working from the latest version of the code.

Initial Release of the code:

We’ll start by creating a piece of code that will contain the main parts of our AI, and then we’ll create a program that uses this code.

Grab a copy of version 1 of our code here: https://github.com/kevinmcaleer/PythonAI/releases/tag/v1.0

Now to build our first AI. It will have one skill - telling bad jokes. To enable us to tell jokes we can use the python pyjokes library

Add the pyjokes by typing the following from the terminal:

Now type the program below.